VIA APPIA PRESS has announced the release of Franklin: From Puritan Precinct to 21st Century ‘Edge City.’ 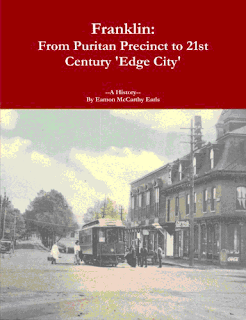 Welcome to Franklin, Massachusetts, a town that to a casual visitor might appear to be nothing more than an ‘ordinary’ Greater Boston suburb; maybe even the kind of place where, “Nothing much ever happens.” But don’t be fooled. This is the entirely true story of how one town transformed from a small hamlet – a precinct in a frontier community -- into one of the fastest growing municipalities in America; an ‘edge city’ built around an Interstate. It’s a story of religious extremists, farmers, factory workers, entrepreneurs, anarchists, and eccentrics. It’s a story more than 300 years in the making and it has never been told before in one volume...until now.

Franklin: From Puritan Precinct to 21st Century ‘Edge City’ is 204 pages in length, featuring more than 70 illustrations, and retails for $19.99. The book can be ordered through www.viaappiapress.com.


About the Author
Eamon McCarthy Earls is a longtime resident of Franklin, and a graduate of Franklin High School, Class of 2012. Eamon has been involved with the Franklin Historical Commission since 2010. Realizing the need for a new, updated history of Franklin, Eamon built on his experience in writing and researching his previous book; Wachusetts: How Boston’s Quest for Water Changed Four Towns and a Way of Life and tapped a wide range of sources, including extensive interviews with local residents, to complete Franklin: From Puritan Precinct to 21st Century ‘Edge City.’