Being able to deal with change was a common thread on Friday. Madison Wendell, FHS Class of 2015 Valedictorian, talked of choosing to embrace change. Principal Peter Light in his remarks to the graduates also talked of change. One of the items also in much discussion during the preparation for this years graduation was the location of the All Night Party.

Given the chance to take photos of the transformation of Horace Mann Middle School to the setting of the All Night Party, I gladly accepted. Hopefully the photos here will do justice to the creation of a magnificent space for a party.

Thanks to the many volunteers who helped to make the All Night Party a success. (Note, I assume it was a success. The space was transformed magically but I'll admit to leaving before the party started!)

Thanks to information provided by the Franklin School Department, I was able to create this pivot table. Shown in descending order, these institutions or life categories are where at least 2 of the 392 graduates of FHS indicated they will be heading to.

Alphabetically, this is the listing of the 79 institutions where only one graduate will go


Madison Wendell, Franklin High School’s 2015 valedictorian, told her fellow graduates Friday to hold on to their drive to explore and, with it, venture confidentially into “the direction of your dreams.”

Wendell also used an anecdote from her childhood – a wild moment at a 2007 Red Sox game – to encourage them to live in the “here and now.” Sitting in the Green Monster seats with her family, her face buried in the seventh installment of the Harry Potter series, she said she missed a home run ball off the bat of Mike Lowell that bounced inches away from her seat. There was a fracas over the ball, with everyone around lunging for it, including her mother.

“And then there’s me, two eyes in a small pink baseball hat, peeking out over the edge of the Green Monster, wondering what on earth everyone was screaming about,” Wendell said.

As part of the Benjamin Franklin Classical Charter Public School's commitment to a classical education, our students in grades 3-8 receive instruction in Latin. This year, on May 29th, students in grades six and eight were recognized for their achievements on the National Latin Exam. 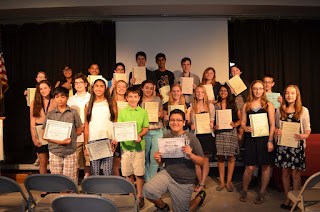 This year, four students in grade six have received certificates of Merit for Introduction to Latin.


These students have received certificates of Merit for Introduction to Latin


Yet discussing the close, Ficco didn't reveal any pangs of regret, though he said it likely hasn’t sunk in completely. It will hit him the hardest, he said, when he drives by the new shopping plaza slated to be built in the alley’s place. The building will be razed.

“There are hundreds of stories, when you’ve been here as long as we have,” he said. “There're all kinds of things – one woman told me she’d been in the same league for 47 years. I feel a little bad for the older folks, my regular customers who’re here every week.”

And Ficco will miss watching the jubilant faces of people as they bowl, especially the children. “I was always around people who were having a good time,” he said, adding that the alley has been the venue for uncountable first dates, many of which blossomed into happy marriages.


A Taunton music teacher, who has taught children in public and private settings in several cites and towns in Massachusetts, has been accused of child rape.

Hocking has been charged with aggravated statutory rape of a child (two counts) and open and gross lewdness. He was held on $10,000 bail following his Wrentham District Court arraignment Thursday.

For all the Town of Franklin Public Meetings click HERE.

*If you have any suggestions or events for the calendar, please email Renata@BetterLivingRE.com
Posted by rgilar at 6/05/2015 06:00:00 AM No comments:

Franklin Police Detectives are still working all leads in this robbery investigation. Female victim was surprised by lone male with a handgun while exiting her car in the driveway. Male suspect brandished firearm at victim and demanded cash, victim gave cash from her pocketbook and suspect male fled down Forest Street on foot. Franklin Patrol Units were in close proximity when call of robbery received and closed off immediate area to allow for Franklin K-9 search.

As a precaution elementary schools in the area were put on administrative lockdown. K-9 search of the area had negative results. Canvass of residents in the area provided limited detail. Case actively being investigated. We are thankful that no one was hurt during this incident.

If you have any information at all we strongly urged you to call the Franklin Police Department Tip Line @ 508-440-2780, leave an email @ tips@franklinpolice.com or speak to a law enforcement officer you know and trust. 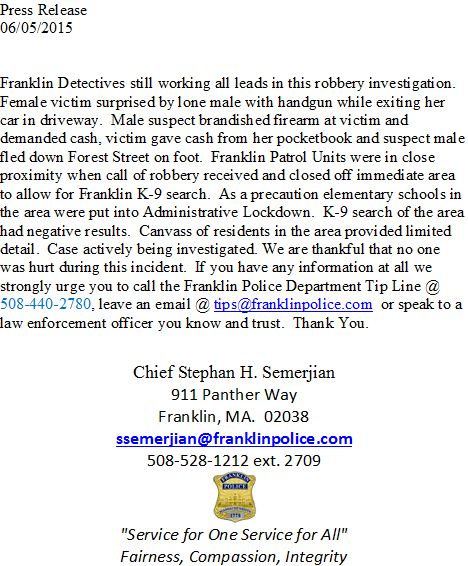 The Milford Daily News article posted for the Friday paper can be found here
http://www.franklinmatters.org/2015/06/a-standard-safety-procedure.html

I was kicking myself for not having posted a reminder to participate in the Library Renovation Survey. However, you do have time to do so as they extended the deadline to Monday June 8th.

You can participate in the survey here:


The Franklin Farmers Market opens for the season this afternoon with more than 20 vendors lining up on the Town Common.

The market, with stands located on Main Street at High Street, is up and running today and every Friday (except July 3) from noon to 6 p.m. through Oct. 30.

“It has become more and more popular each year, and the town has embraced it and is very cooperative in getting us the permits we need to run,” said Grateful Farm owner Tim Garboski, the market manager.

FHS Girls Tennis and Lacrosse advance, Softball ends with a walk off loss


Things were looking up for Franklin, who took its second one-run lead - a 2-1 lead over Norwood - of the game in the top of the seventh and got the first out in the bottom half on the first batter.

But a single from the #9 hitter Emily Bonoccorso turned into a runner in scoring position after a wild pitch and a single put runners on the second and third with just one out. A ground out to short brought the tying run home to make it 2-2 with the throw allowing the runner to third.


After an intentional walk to Norwood’s top hitter Erin Graczynski, the first pitch of the next at bat squeeze through to the back stop, bringing Siobhan Reen home for the walk-off win.

“We fought,” Franklin head coach Kate Fallon-Comeau said. “It was a dogfight per usual but we just didn’t have it in the end.”

Other Hockomock league results from Thursday can be found here
http://www.hockomocksports.com/blog/hockomock-schedule-scoreboard-060415

MassBudget: The State of Working Massachusetts