In a follow up to the Public Hearing held on Jun 28th, the Milford Daily News writes:


One piece of the project business owners seem to collectively approve is the one-way traffic on Main Street and West Central Street being converted to two-way. Most agreed the change is one of its most notable, and appealing, aspects.

Michael Espinosa, owner of Fitness Together on Main Street, said he and some of the other business owners see the one-way traffic on Main Street as uninviting.

“If you miss the business you’re looking for, you have to loop back around again,” Espinosa said. “That’s very frustrating to people.”

“I think the change to two-way, it will be a good thing,” said Virginia Kon, owner of Maguro House, a Japanese-style restaurant on East Central Street. “I think it will help the (the flow) of traffic, help people driving to 495.”


My reporting on the public hearing can be found here
http://www.franklinmatters.org/2012/06/live-reporting-public-hearing-downtown.html


Design documents on the downtown project can be found here
http://franklinma.virtualtownhall.net/Pages/FranklinMA_Planning/dtimprovement

Lt. Gov. Timothy Murray is scheduled to be at the White House this afternoon when President Barack Obama signs the Surface Transportation Extension Act of 2012, a $105 billion federal highway and transit funding bill that will send roughly $1.9 billion back to Massachusetts over the next two years for numerous projects, including work in Franklin, Wellesley and Needham.


The Farmers Market is open today on the Town Common from noon to 6:00 PM.

Email ThisBlogThis!Share to TwitterShare to FacebookShare to Pinterest
Labels: 4th of July

via The Milford Daily News News RSS by GateHouse Media, Inc. on 7/5/12

Hundreds of thousands of Internet users may lose their online access on July 9, 2012, and Better Business Bureau is urging all consumers and businesses to run a quick and easy diagnostic test to see if their computers are infected.

There are committee openings available at the beginning of this new fiscal year. The Finance Committee (FinCom) Council on Aging, and Design Review Committee all have openings.

Review this page for additional info and the application form:
http://franklinma.virtualtownhall.net/Pages/FranklinMA_News/0190401F-000F8513

Email ThisBlogThis!Share to TwitterShare to FacebookShare to Pinterest
Labels: committees 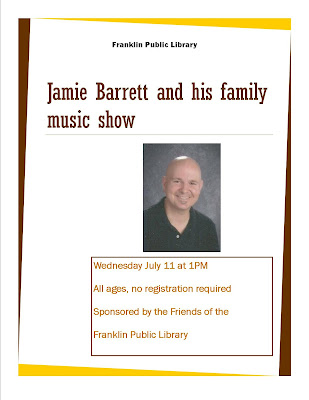 What is in the Legislature's Budget Proposal

The American Red Cross has launched an emergency call for blood donations, as blood supplies are dangerously low. At the national level, the organization in June received 50,000 fewer donations than expected, and there is half the amount of blood available now than there was this time last year.


On this 4th of July, let's take a moment to reflect on the words that formed our government.

You may recall that the US Constitution begins


We the people of the United States, in order to form a more perfect union, establish justice, insure domestic tranquility, provide for the common defense, promote the general welfare, and secure the blessings of liberty to ourselves and our posterity, do ordain and establish this Constitution for the United States of America.

What does the Constitution of the Commonwealth of Massachusetts say? In the third paragraph, you'll recognize the key phrase but pay attention to the first two paragraphs!


The end of the institution, maintenance, and administration of government, is to secure the existence of the body politic, to protect it, and to furnish the individuals who compose it with the power of enjoying in safety and tranquility their natural rights, and the blessings of life: and whenever these great objects are not obtained, the people have a right to alter the government, and to take measures necessary for their safety, prosperity and happiness.

The body politic is formed by a voluntary association of individuals: it is a social compact, by which the whole people covenants with each citizen, and each citizen with the whole people, that all shall be governed by certain laws for the common good. It is the duty of the people, therefore, in framing a constitution of government, to provide for an equitable mode of making laws, as well as for an impartial interpretation, and a faithful execution of them; that every man may, at all times, find his security in them.

We, therefore, the people of Massachusetts, acknowledging, with grateful hearts, the goodness of the great Legislator of the universe, in affording us, in the course of His providence, an opportunity, deliberately and peaceably, without fraud, violence or surprise, of entering into an original, explicit, and solemn compact with each other; and of forming a new constitution of civil government, for ourselves and posterity; and devoutly imploring His direction in so interesting a design, do agree upon, ordain and establish the following Declaration of Rights, and Frame of Government, as the Constitution of the Commonwealth of Massachusetts.

And of course, the Franklin Charter, by which we are empowered to govern ourselves begins:


We, the people of the Town of Franklin, Massachusetts, in order to form a more perfect community, reaffirm the customary and traditional liberties of the people with respect to the conduct of our local government and take fullest advantage of the Home Rule Amendment to the Constitution of the Commonwealth, do ordain and adopt this Home Rule Charter for our Town.


Parts of this was originally posted to Franklin Matters Weekly
http://franklinmattersweekly.blogspot.com/2012/05/week-ending-may-20-2012.html

Among the communities listed is Franklin which is scheduled to receive $921,628.

via The Milford Daily News News RSS by GateHouse Media, Inc. on 7/3/12

Some local infrastructure will soon get a facelift after Gov. Deval Patrick today announced that more than $28 million will be available for local road and bridge projects in Worcester County. The Chapter 90 funds – which are part of a $200 million transportation bond bill passed last week by the Legislature – are allocated to cities and towns using a formula based on community road miles, population and employment.

If you are traveling up to NH along i93 or to the Cape, there is additional information now becoming available on current traffic conditions for those areas:

At the same time, MassDOT is also helping Cape Cod travelers by rolling out new traffic resources, including new online cameras showing road conditions on Route 6 Westbound and using message boards to share with drivers the extent of the heavy traffic leaving the Cape on Sundays.


In the fall of 2011 Peter Norvig taught a class with Sebastian Thrun on artificial intelligence at Stanford attended by 175 students in situ -- and over 100,000 via an interactive webcast. He shares what he learned about teaching to a global classroom.

Peter Norvig is a leading American computer scientist, expert on artificial intelligence and the Director of Research at Google Inc.

In the News: neighbors, finish, holiday

Neighbors to the rescue in Franklin


Franklin family team takes on Finish at the 50

by Kathleen Sullivan/Special to the Daily News


Combining projection mapping and a pop-up book, Marco Tempest tells the visually arresting story of Nikola Tesla -- called “the greatest geek who ever lived” -- from his triumphant invention of alternating current to his penniless last days.

A magician and illusionist for the 21st century, Marco Tempest blends cutting-edge technology with the flair and showmanship of Houdini

Boston and the tall ships for the 4th of July

Boating Local takes a tour of Boston Harbor on Friday as some of the tall ships come in.

If you're heading into Boston, this will give you a taste of what you can see.

If you haven't planned to go, this may be enough enticement to consider it!

Mass transit and parking restrictions to consider if you do venture into Boston
http://www.franklinmatters.org/2012/06/going-to-boston-parking-mbta-schedules.html

Tip of the hat to the Universal Hub for the link to the video
http://www.universalhub.com/2012/hello-sailors

Children have their day of celebration in Franklin

Emerys’ love has lasted a lifetime in Franklin

Most towns poorly prepared to pay for retirement benefits

How many fires do firefighters really fight?

No age limit on bullying