Call to Order
Pledge of Allegiance
Moment of Silence
I. Routine Business
A. Review of Agenda
B. Citizen’s Comments

The agenda doc with connection info can be found
https://www.franklinps.net/sites/g/files/vyhlif4431/f/uploads/scagenda_6-8-21.pdf
The meeting packet folder with docs released for the meeting (will also include those updated after the meeting)  https://www.franklinps.net/district/school-committee/pages/june-8-2021-school-committee-meeting-packet
Posted by Steve Sherlock at 6/05/2021 07:00:00 AM No comments:

The meeting was conducted in a virtual format: some members were in the Municipal Bldg, other committee members and a small group of public participation were remote via the Zoom conference bridge, all to adhere to the ‘social distancing’ requirements of this pandemic period.

The meeting was a public hearing on the draft Housing Production Plan. It is open from comment until June 25, 2021. At that time, the comments will begin to be incorporated into an update which will also be subject to public hearings in particular by the Planning Board and Town Council as part of their approval process before being submitted to the State.

The show notes contain links to the meeting agenda and to the presentation document used. Let’s listen to the Municipal Affordable Housing Trust meeting of June 2 Audio file = https://player.captivate.fm/episode/9fdbe6af-3f6b-4f3b-922d-bf85ba9af371

Copy of the plan can be found https://franklinma.gov/sites/g/files/vyhlif6896/f/uploads/franklin_housing_production_plan_-_may_2021_public_draft.pdf

My notes from the meeting

We are now producing this in collaboration with Franklin.TV and Franklin Public Radio (wfpr.fm) or 102.9 on the Franklin area radio dial.

"the aggregation rate is often lower than the utility rate"

"AROUND THE WORLD, in the White House, and at our State House, leaders are finally beginning to respond to the climate challenge. Here in Massachusetts, we can take pride in bold new legislation to curb greenhouse gas emissions. And the nation’s first large-scale off-shore wind project, Vineyard Wind, has been given the go ahead by the federal government. Those are exciting developments, but there’s something happening at the local level that deserves our attention as well.
In Massachusetts, cities and towns are increasingly taking advantage of a process known as green municipal aggregation or community choice electricity, which allows municipalities to purchase electricity directly from suppliers (rather than relying on the utilities to do it for us). Through aggregation, communities can offer options that include more wind and solar than required by state law at affordable rates. Today about 50 cities and towns in Massachusetts have done so and dozens more are at various stages of the approval process. Communities that have been doing this for some time keep renewing and usually add more renewable energy as time goes on."

Continue reading the article online
https://commonwealthmagazine.org/opinion/the-municipal-solution-to-climate-change/
Municipal aggregation was approved by Franklin in 2016 and in 2020 they finally implemented a contract with good pricing. Town Administrator Jamie Hellen provides the update and background to the Town Council in this audio segment. The link also contains link to the steps along the process from the archives.
https://www.franklinmatters.org/2020/02/fm-208-jamie-hellen-on-municipal.html
Municipal aggregation is reported on quarterly and you can find those reports on the Town page  https://www.franklinma.gov/administrator/pages/municipal-aggregation
Posted by Steve Sherlock at 6/05/2021 06:30:00 AM No comments:

"Live Stream for Sunday: https://www.facebook.com/events/200734355254645/
Please click on the link above to access the live stream on Sunday, June 6 at 3 PM. The video will also be available on the Franklin Area Moms public Facebook page. You will be able to ask questions through the live stream. Cobi Frongillo, the moderator for the event, will get through as many of the questions as the panel is able to during the event.
*Don't forget, Franklin TV and several other local access TV stations will be airing the event as well!"

The SAFE Coalition is hiring 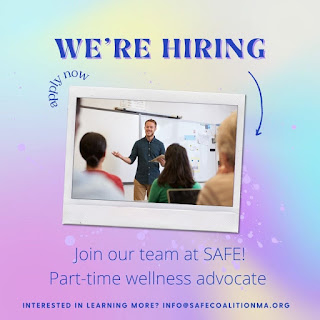 The Class of 2021 Graduation Ceremony is postponed until 7:00 pm tonight (originally scheduled for 5pm). The Car Parade begins Sat, June 5th at 10:40am. We hope to see you cheering on our graduates tomorrow and we are looking forward to honoring their accomplishments tonight! https://t.co/NBOPWUMTfe

If you have an event to add to the calendar, you can use the form to submit it for publication:  https://forms.gle/oPdi8X3ZbHHyrHzo6

Join the discussion at THE BLACKBOX for the Pride Youth Forum. Sunday, June 6 from 1 to 2:30 PM.

Town of Franklin: June 2021 Newsletter posted and ready for you to read!

The June 2021 Edition of the Town of Franklin newsletter is now posted! Stay updated and informed about what is happening in town!

Email ThisBlogThis!Share to TwitterShare to FacebookShare to Pinterest
Labels: newsletter, Town of Franklin

From HockomockSports.com we share the FHS spring sports results:
Baseball = Franklin, 0 @ Mansfield, 2 – Final
– Mansfield scored back-to-back runs in the bottom of the fifth and the duo of Aaron Blinn and James Gilleran combined for a shutout as the Hornets handed Franklin its first loss of the season. Gilleran reached on an error and Liam Anastasia had a bunt single to put two runners on. Junior Colby Geddis followed with a single to bring in courtesy runner Andrew Slaney, and junior Anthony Sacchetti followed with an RBI single of his own to plate Anastasia. Blinn got the start for the Hornets, tossing 3.1 scoreless innings, allowing just two hits and one walk with five strikeouts. Gilleran came on in relief to close it out, giving up just one hit in 3.2 innings of work, striking out four. Franklin starter Jacob Jette had just two unearned runs allowed on four hits and one walk, striking out four in 4.2 innings.
Softball = Mansfield, 1 @ Franklin, 2 – Final
– Franklin scored twice on three hits in the first inning and was able to hold off the Hornets to earn a split of the season series. Mansfield got its lone run in the top of the second. Molly Kucharski, Ashlyn Conley, and Nicole Kobasa had three straight singles and then a fielder’s choice by Abby DeCoste plated the run. Conley, who was 3-for-3 at the plate, was strong in the circle, despite picking up the loss. She allowed only one hit after the first inning.

Boys Tennis = Franklin, 4 @ Mansfield, 1 – Final
– Behind a pair of wins in both singles and doubles action, Franklin earned a 4-1 victory on the road over Mansfield. Senior Liam Marr had a strong outing at first singles with a 6-1, 6-0 win while junior Vayshnav Malhotra added a 6-1, 6-3 win at second singles. Senior Anish Gundimeda and junior Sameen Shaik battled to a 4-6, 7-6 (5), 10-6 win at first doubles while Thomas Broyles and Jay Gorgas added a 6-1, 6-2 verdict at second doubles.
Girls Tennis = Mansfield @ Franklin, 3:45
Wrestling = Mansfield, 21 @ Franklin, 43 – Final

For the complete results around the Hockomock League
https://hockomocksports.com/thursdays-schedule-scoreboard-06-03-21/
Posted by Steve Sherlock at 6/04/2021 05:40:00 AM No comments:

Expressions Enrichment is hosting an adult paint night taught by Franklin Artist Ted Cormier-Leger. Ted will teach different techniques using acrylics and we will work on a simple still life.

Enjoy wine from La Cantina Winery and light refreshments (included with your ticket).

For more about Expressions Enrichment www.expressions-enrichment.com

The Library Book Sale returns today from 1 to 4 PM

"As Massachusetts recovers from the COVID-19 pandemic, and as we prepare for our future, we have a unique opportunity to move towards a Commonwealth that truly works for all residents.

To that end, the Legislature will be holding a Joint Session on Wednesday, June 9, 2021 with the intent of voting on the Fair Share Amendment. This will allow the measure to be placed on the ballot and put before the people for a vote.

We stand with the residents of Massachusetts in exploring new ways to increase revenue for the state as we envision and invest in an equitable and hopeful future for the Commonwealth."

On background: The Legislature advanced the Fair Share Amendment back in June 2019. A second vote is needed for it to be placed on the November 2022 ballot.

MyFM103: Quest for the best - vote for your best selection

Please cast your ballots for your favorite Franklin businesses in the Myfm 101.3 contest!https://myfmquestforthebest.com/vote/#FDP#buylocal#questforthebest

"State public health officials on Thursday released a raft of summer safety recommendations for preventing tick and mosquito bites, as well as precautions to take in the water and in cars.
The tips came in a detailed statement from the Massachusetts Department of Public Health, or DPH.
Regarding ticks, officials said the “the single most important thing” residents can do is check themselves for the blood-sucking insects once a day."

"Improving housing stability for low-income families in Boston, and assisting them in accessing social services, sharply reduced their health problems, a five-year study has found.
On Tuesday, the Boston Foundation released a report on the impact of Health Starts at Home, an initiative launched in 2015 with two nonprofits, Health Resources in Action and the Urban Institute. Its goal was to establish collaborations between housing services and health care providers to offer comprehensive support to families with children who were struggling to make rent and put food on the table.
“Part of the partnership between health care and housing is you have one person connecting the household to a whole range of services, whereas in the past you would have sent them to a housing specialist, and then someone who specialized in [food assistance] benefits, and then a different person doing a different thing,” said Soni Gupta, senior director of Neighborhoods and Housing for the Boston Foundation, New England’s largest community foundation. “It’s a kind of focus in service provision that we don’t typically fund at this level.”

World Elder Abuse Awareness Day: What We Have Learned

"World Elder Abuse Awareness Day (WEAAD) on June 15 raises awareness of the cultural, social, economic, and demographic processes affecting elder abuse and neglect. This is more important than ever as cases of elder abuse have increased significantly during the pandemic. Abuser tactics—isolation, manipulation, and systemic barriers (such as ageism and racism)—put older adults at greater risk for harm.

One common tactic scammers use is to pose as Social Security employees. They may claim the older person’s Social Security number is linked to a crime. Feeling isolated and frightened, the scammers get the older person to provide them money or vital personal information that they then can use to exploit them financially. Social Security offers guidance and reporting assistance to help prevent this form of elder abuse. If you or someone you know is a target of one of these scams, we encourage you to report it on the Social Security’s Office of the Inspector General website."

Continue reading the article online
https://blog.ssa.gov/world-elder-abuse-awareness-day-what-we-have-learned/
Posted by Steve Sherlock at 6/04/2021 05:00:00 AM No comments:

This session of the radio show shares my conversation with a wonderful fun loving panel of business and artists on the forthcoming ArtWALK Celebration. We had our conversation via virtual conference bridge to adhere to the ‘social distancing’ requirements of this pandemic period.

We talk about the upcoming ArtWALK scheduled for June 11, 12 and 13. The events will take place on the Town Common, at THE BLACK BOX, and the Historical Museum.

Check out the Cultural District page for all the details https://www.franklinculture.org/home/pages/franklin-artwalk-celebration-escape-arts

The recording runs about 25 minutes, so let’s listen to our conversation

We are now producing this in collaboration with Franklin.TV and Franklin Public Radio (wfpr.fm).

One of the pieces of art to be displayed at Agway: