The disappointment in the local election turnout is real. When only about one fifth of the registered voters come out to cast their ballot, something is wrong. Especially in Franklin, where history does show that voters can and do turn out, just not for these local municipal elections.

The recent history of voter turnout in Franklin shows four levels of getting to the polls. National elections (2004, 2008 and the special election for Sen Ted Kennedy's seat) draw the most. The next draw is when there are state-wide elections (2006 and 2010). Money issues will bring out about 40 percent of the voters as shown with the three override votes (2007, 2008 and 2010).

At the bottom of the pile: the local election to run our town on a daily basis. The folks that make the important decisions for town operations get the least attention (15-22 percent).

Maybe next time a charter change is discussed, we should give some consideration to changing the cycle to get in with either the State-wide elections or national elections (even years instead of odd years). 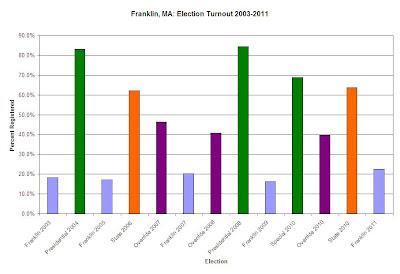 The spreadsheet that drove the chart above can be viewed here:


You can also click through to Google Docs to find this spreadsheet:
https://docs.google.com/spreadsheet/ccc?
key=0AkwjbnXDBhczdDB6NnUyUWZJbW90azlKbHBzTzdqYWc


The data was taken from the annual reports as published by the Franklin, MA Town Clerk.
Note: that for some years the annual registered voter totals need to be re-calculated as what appears in the report is incorrect. The election result totals are always correct.  Specifically, you can look for a recent example in the Annual Report for 2010 - p77, the cross totals don't agree with the indivdual categories