Over 100 people gathered at the Franklin Elks on Tuesday to help Jeff Roy launch his campaign for the 10th Norfolk District. Chris Feeley, Paul Ravich, and Michael Doherty spoke in turn to introduce Jeff and provide some context for their support of Jeff in this effort.

Jeff talked of his year studying law at DePaul University in Chicago and how the "ticket to getting home was working hard". Each of the introductions also referenced Jeff's hard work in multiple areas. 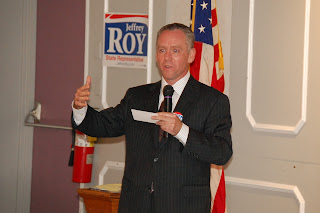 He told the story of a college visit with one of his daughters and being stopped by a statue on one campus that was engraved "What are you doing for justice?" His work on this campaign will be to help answer that question. A recent speech provides a more complete version of the story and its impact.

Sparked by the loss of a couple of friends to cancer, he turned to the PanMass Challenge as "a way to channel those feelings, that energy, to do something good to fight cancer."

Jeff went on to highlight the three areas of focus for his campaign: jobs and the economy, quality education, and bringing civility back to government. He called for those gathered to "come together, work together to bring about a better life for us in MA."

For more about Jeff Roy and his campaign you can visit his website http://jeffreyroy.com/ or his Facebook page http://www.facebook.com/jeffroyforstaterep


Note: this is not an endorsement of Jeff. As a reporter, I am looking to share accurate information for my fellow voters to create an informed decision for the 10th Norfolk district primary on Sep 6 and election on Nov 8.  As I have offered to candidates in prior Franklin elections, I will offer also to the candidates for the 10th Norfolk, the opportunity to have a full interview published here. As the campaign season progresses, I'll remind the candidates of the offer.