Good news for the SNETT!

Rail trails or bike trails are trending recently and this article brings more good news. A section of the Southern New England TrunkLine Trail (SNETT) which begins in Franklin and runs west to Palmer, MA will be upgraded as part of this north-south trail between Providence and Worcester!

“The bike trail will be a two-state transportation network between Worcester and Providence,” she said. “Much of the trail in Rhode Island has already been built.”

According to DiPrete, though, progress on the Massachusetts half of the project, which will eventually run 28 miles, has been slower. The Rhode Island trail is 10 miles long.

“The Massachusetts end has languished a bit because of environmental challenges along the route,” she said. “We’re hoping we’ll eventually see a bike trail between Worcester and Providence, two of the largest cities in New England.”

The Franklin bellingham Citizens Rail Trail Committee is working on the Franklin and Bellingham section of the SNETT. http://www.franklinbellinghamrailtrail.org/ 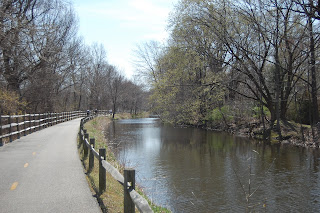 The Rhode Island segment mentioned here runs from Woonsocket through Cumberland and Lincoln to Central Falls. This segment runs along the Blackstone River canal and is a very good ride. You can start in Woonsocket at the River Edge athletic fields, or at the rest area on northbound i295 and have a choice of connecting to the trail to ride north or south.

More about the Blackstone River Bikeway can be found on their website
http://www.blackstoneriverbikeway.com/