This Monday is the second Juneteenth officially recognized as a federal holiday in the U.S. All federal government offices, federal courts, banks, post offices, schools, and U.S. financial markets will be closed. This year, the Juneteenth holiday will be observed in the U.S. on Monday, June 20. It is officially African American Independence Day.
Although President Lincoln’s Emancipation Proclamation officially abolished slavery in January 1863, it would be over two years before the Civil War ended in April 1865, and even longer before the news spread to all parts of the U.S. June 19 approximates the day that General Granger and his troops landed at Galveston, Texas with news that the Civil War had ended and that the last of enslaved African Americans were free. Originating in Galveston, the holiday has been celebrated in various parts of the U.S. since the 1860s. It was finally recognized as a federal holiday last year, in the midst of the Black Lives Matter movement, when President Joe Biden signed the Juneteenth National Independence Day Act into law. 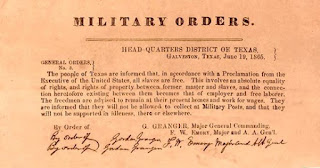