The area already covered by the grant money is shown on the map in the light green. The area in question is shown in pink. 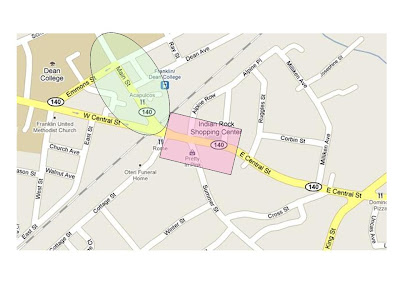 Additional information on the project can be found here:
http://www.milforddailynews.com/topstories/x1452735553/Franklin-council-to-discuss-placing-utility-lines-underground

The Downtown Improvement Project review meeting held on May 12 was broadcast and recorded for review here:
http://franklinmatters.blogspot.com/2010/05/downtown-improvement-project-live.html


The poll question can be found in the center column on the top of the Franklin Matters web page. The question asks "Would you pay approx. $70 to put the utilities underground?" and takes a Yes or No answer.

Feel free to leave a comment here or send me an email.  The Town Council email addresses can be found on the Franklin web page here:
http://franklinma.virtualtownhall.net/Pages/FranklinMA_Council/index

My thanks to Tina Powderly for help in crafting this posting.