The MA Dept of Revenue released numbers on the Senior Circuit Breaker program for all communities in the Commonwealth on Friday. Franklin does well with this credit. There has been steady growth in the number of filers, total credit received, and as a result the average credit per filer. The data released covers the tax years from 2001 through 2009. Now that the data is available, I'll watch to see when each new year is added to the table and update the numbers. 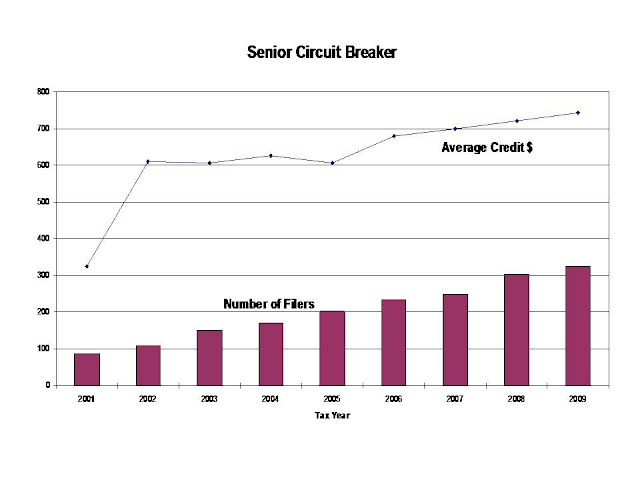 
What is the Senior Circuit Breaker?


No other refundable tax credit equals the Senior Circuit Breaker Tax Credit for putting money into the wallets of average taxpayers 65 and older. In tax year 2009, more than 77,000 senior taxpayers who were either homeowners or renters received credits of nearly $60 million.

Yet it is safe to say that many eligible taxpayers have never heard of the credit. If you are reading this and have older relatives or friends who might benefit, pass on the word. The maximum credit, after all, is worth $970 in the coming tax year.

The Department of Revenue has just released the rules and regulations for the Senior Circuit Breaker Tax Credit in tax year 2010. The credit is based on the actual property tax or rent paid by the eligible taxpayer who is either living in their own home or paying rent.

A taxpayer's total income may not exceed $51,000 for a single individual; $64,000 for a head of household; or $77,000 for married couples filing a joint return. The assessed valuation of a residence may not exceed $764,000. Many taxpayers 65 and over fall within these limits.

The credit is equal to the amount by which the taxpayer's property tax payments in the current tax year, including water and sewer charges but excluding any abatement or exemption, exceeds 10 percent of the taxpayer's total income.

The credit also works for renters. It is equal to the amount by which 25 percent of the rent actually paid during the taxable year exceeds 10 percent of the taxpayer's total income, with the credit capped at $970.

For additional info on the credit, check the State website here

To view (or download) the data from the state, check the web page here

The table of Franklin's data is also posted as a Google document and can be found here. I pulled from each year, the data specific for Franklin to make this table. The info in this table drove the chart and table found above.

Related post on credits or abatements for seniors
http://franklinmattersweekly.blogspot.com/2010/03/fmw-59-week-ending-3710.html