"It drives what we do"

The School Committee meeting Tuesday evening is partially covered in this article in the Milford Daily News. The District Improvement Plan was presented (as detailed) but there were other items on the agenda.

I did have the opportunity to work on the Strategic Planning Committee when the current vision and mission statements were developed. To see this latest iteration of the district plan build upon what was started then is heartening. The evolution of the planning process itself is good to see. No longer are we viewing multi-year plans, the plan will focus on a year at a time. Certain themes will carry from one year to another but they'll be able to re-focus to address the latest issues within that theme.

That the MCAS scores reflect only 20% of what goes on in the schools was one of the key reasons for this change in the planning approach.


"We wanted to take a step back," said Superintendent Maureen Sabolinski. "In the past, it has been really about our MCAS data; we decided to take a global perspective. We decided to look at a wide range of data … to articulate where we are going as a district."

Part of this ideological shift stems from school officials wanting to spur success in all subjects, in math classes as much as art classes, as opposed to only those covered by the exam itself.

Broadly, the core values in the plan include fostering the right academic climate, nurturing civic leadership and accepting more feedback from the community.


On the Parmenter modular units:
Essentially as these are the last of the leased units, the Town is dependent upon the contractor to remove them. Work was underway on Tuesday. They removed the cooling units from the roof of the modulars. They are scheduled to be removed from Parmenter by Friday. These delays will not be see in the removal of the other modular units as those are owned by Franklin and the DPW will control that schedule. 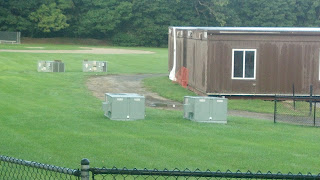 While there are population shifts from school to school, the district does not have a committee looking at redistricting until after the modular units are removed and the work on renovating Davis Thayer is complete. Both of these items will clarify the picture on what space is available and where the population exists within Franklin.

For reporting on the complete agenda of Tuesday's School Committee meeting, you can find the link here:
http://www.franklinmatters.org/2012/09/school-committee-091112.html