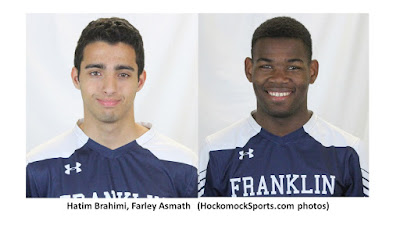 
Franklin senior Hatim Brahimi was once again one of the top playmakers in the Hockomock League. From his central midfield position, Brahimi was quick to make decisions and was the catalyst for the Panthers’ attack. His vision and skills with the ball at his feet made him one of the top players in not only the league, but the area. A three-year varsity player, the senior captain scored once and had one assist in 2016. “He is technically and tactically one of the best players that we’ve had in Franklin over the last few years,” Franklin head coach Fran Bositis said.


Franklin senior Farley Asmath garnered a lot of attention during his final year with the Panthers. The speedy Asmath, who was a handful for opposing defenses, led Franklin with seven goals and two assists. “Farley has worked very hard to make himself into a very good player,” Franklin head coach Fran Bositis said. “I feel that he has made great strides as a player when you consider he had never played organized soccer until he came to this country four years ago. I believe that he is only going to get better if given the opportunity to play at the next level.”


For the complete listing of awards for the 2016 Hockomock Soccer season
https://hockomocksports.com/awards/boys-soccer/2016-2/