Learn about zoning in Franklin! View the Forum March 7

Join the Town of Franklin and MAPC for our first public forum on Monday, March 7 at 7PM! This will be a hybrid meeting that takes place in the Council Chambers at Town Hall (please note the change in location) and over Zoom. Click the link below to register and tell us if you plan to attend in person or remotely.

Register for the March 7 Forum

Zoning regulations throughout the United States, particularly in older communities, often result in conflicting goals between a zoning district's regulations and the existing development patterns of that area. Franklin's zoning code and associated districts were first adopted by the Town's Planning Board in 1930, after almost two-thirds of Franklin's current structures were built. As such, many of the most beloved buildings in Franklin Center could not be legally built today because of dimensional or use restrictions in the zoning regulations.
Prior to Franklin's zoning code being adopted, the primary modes of transportation for the average American would have been walking, bicycle, horseback, or using a streetcar transit system. In that year, there were roughly 217 cars per 1,000 people in the United States, a number that grew to 380 in 1955 and to around 800 in 2010. As family and individual car ownership continued to exponentially increase throughout the 20th century, so did a greater focus on zoning regulations to cater to the experience of motorists above all other modes of transportation. The below photo shows Franklin's Main Street back when its streetcar system was in operation 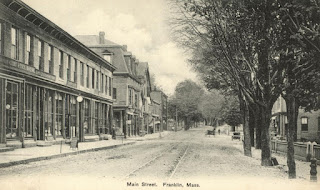 Email ThisBlogThis!Share to TwitterShare to FacebookShare to Pinterest
Labels: downtown, forum, Franklin For All, historic, zoning