"A misleading letter, from an unknown source, is circulating online that mentions a $1,200 special Social Security earnings credit for people who served in the military. We want to make sure veterans with active and inactive service have the appropriate information that they need and do not take unnecessary action.

You can read more in our Military Service and Social Security fact sheet. We take your benefits seriously because we know you depend on them. Thank you for your service!"

"Although he has not served in the military, Alan Earls has felt a strong connection to the armed services since he was a kid.

“When I was a child, my dad, and pretty much every adult male I knew, was a veteran of World War I, II or the Korean War,” said Earls. “Later, of course, many contemporaries went off to Vietnam.”

It was a time when, he said, “military service by males was universal and honored.” And while not everyone directly faced peril, “everyone who served played an important role, for limited benefits and modest thanks.”

As the son of a veteran, Earls felt from an early age the importance of always remembering and honoring people — both men and women — who have served, “or simply been ‘asked’ by their country to serve.”

Continue reading the article online (subscription may be required)
https://www.milforddailynews.com/news/20200910/sons-rise-in-franklin-legion-post-75-relaunching-support-group?rssfeed=true

"Vittorio Ettore’s restaurant, Bistro 5, was “basically 100% empty” at 7:30 p.m. on a Friday when a city official happened to stop in and suggested Ettore needed a patio.
Ettore was skeptical of the idea at first, he recalled Thursday. His Italian restaurant is at a busy intersection, and with the West Medford commuter rail station nearby, overlooks steady train and bus traffic.
“There’s a lot going on in the streets, but she really got me inspired to actually do a small patio, and I have to say, since we decided that evening, within five days, I was able to do business outside, which is kind of incredible,” Ettore said. “We went from doing roughly about under 30 people per week in June and July, which is pretty crazy, to roughly 30 to 40 people a day, so that has changed our business completely.”
Gov. Charlie Baker, Medford Mayor Breanna Lungo-Koehn and other officials visited Bistro 5 on Thursday, where Baker announced a doubling of the Shared Streets and Spaces grant program from $5 million to $10 million."

Continue reading the article online (subscription may be required)
https://www.milforddailynews.com/news/20200910/outdoor-dining-gets-boost-with-doubling-of-shared-streets-and-spaces-grant?rssfeed=true
Posted by Steve Sherlock at 9/11/2020 05:10:00 AM No comments:

In the News: "Mass. lawmakers push back on Trump’s military threat"


"President Donald Trump on Monday said he wouldn’t hesitate to deploy the military into American cities to forcefully quell violence, looting and vandalism if governors can’t control the protests against police brutality occurring around the country. But the threat was met with resistance in Massachusetts, where the state’s top law enforcement official described it as illegal and a “stupid thing to do.”

Attorney General Maura Healey on Tuesday said that Trump “doesn’t have the authority to say what he’s going to do.” And based on conversations with Massachusetts police, she’s also worried that greater militarization will lead to more tension.

“We need to push for deescalation and a calming and restore a semblance of order,” Healey said in a virtual appearance before the Greater Boston Chamber of Commerce. “We don’t need soldiers in our streets.”

Healey’s comments came the morning after U.S. Sen. Edward Markey described Trump’s Rose Garden remarks as “un-American,” and U.S. Rep. Joseph Kennedy said a military response to the anger being displayed on the streets would not work."


Continue reading the article online (subscription may be required)
https://www.milforddailynews.com/news/20200602/mass-lawmakers-push-back-on-trumps-military-threat

Free File is for individuals or families whose adjusted gross income was $69,000 or less last year. Free File is a private-public partnership between the IRS and the Free File Inc.

"The IRS takes special steps to help military members and their families with their taxes, and the Free File program is part of that effort," said IRS Commissioner Chuck Rettig. "Almost 10% of the IRS workforce are veterans. We greatly appreciate the service to the nation of every veteran and their supportive families, and we will do all we can to assist them."

For active duty military and their spouses, Free File has a special offer. Individuals and their families who meet the income limitation may choose from any of nine companies without regard to additional eligibility requirements.

Active duty military stationed in combat zones also have more time to file their tax returns. However, those with spouses and families may opt to file as soon as they are able to claim various tax benefits for which they may be eligible. If only one spouse is present to file a joint return, they must have proper authorization to file a joint tax return on behalf of their spouse.

The IRS will begin processing tax returns on Jan. 27. With Free File, you can use any digital device, personal computer, tablet or smart phone. Free File products are mobile enabled so you can do your taxes on your smart phone or tablet and e-File with your hand-held device.

Generally, each Free File partner sets additional eligibility requirements that civilian taxpayers must meet. Non-military personnel should use the "look up" tool at IRS.gov/FreeFile to find the best match.

Military members can get more information on their special tax benefits at IRS.gov/military.

If you’re a soldier, you’d better just call them ma’am and salute.

Maj. Gen. Maria Barrett and younger sister Brig. Gen. Paula Lodi are each accomplished in their own fields. But together they have become the first two sisters, the Army believes, to attain the general’s rank in the service's 244-year history.

"Maj. Gen. Maria Barrett and Brig. Gen. Paula Lodi represent the best America has to offer," said Acting Army Secretary Ryan McCarthy. "However, this comes as no surprise to those who have known them and loved them throughout this extraordinary journey. This is a proud moment for their families and for the Army."

Military Hiring Event in Boston - May 14

At the Boston Hiring Expo, join the Boston Red Sox and Hiring Our Heroes to connect directly with recruiters and hiring managers from local and national companies of all sizes.

This event is free and is open to active duty service members, Guard and Reserve, veterans, and military spouses. Even better? All registered veteran and military spouse job seekers who attend the hiring expo are eligible to receive up to two free tickets to attend the evening's game between the Boston Red Sox and the Colorado Rockies.

More info and to register
https://events.hiringourheroes.org/events/boston-hiring-expo/event-summary-6c38865e57c048c9a9c8b2916a43fc38.aspx

All present and past military service members and families are invited to a special tribute dinner to honor the heroes and victims of 9/11/01. This non-political free dinner is our gift to you.

To honor those who have served in the military, a display of military uniforms is the feature this month at the Franklin Historical Museum. 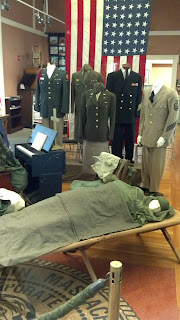 Pictures of Franklin men and women in uniform are on display 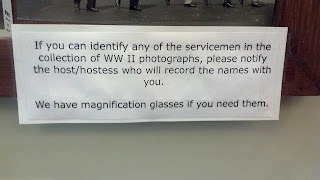 Is there someone you know or remember pictured? Stop by to look.

Where is the Historical Museum? 80 West Central St

You can visit their webpage  http://www.franklinhistoricalmuseum.com/

1 - This Christmas enjoy the holiday trains from South Station:

2 - follow this link to a great Christmas story (be patient for the first commercial, the story is worth waiting for)

3 - and to recognize our countrymen and women serving in the military:

Merry Christmas to one and all!