Get Your Tickets for the August Dinner Dance! - Aug 6

Get Your Tickets for the August Dinner Dance!

THIS EVENT IS OPEN TO EVERYONE... BRING YOUR FRIENDS AND NEIGHBORS FOR A NIGHT OF FUN!

TICKETS ARE $20/PP AND ARE AVAILABLE IN THE VETERANS' SERVICES OFFICE AT THE SENIOR CENTER.

THANKS TO THE GENEROSITY OF THE THE FRANKLIN ELKS LODGE #2136, ALL PROCEEDS WILL BENEFIT THE WAR MONUMENT RESTORATION FUND!

WE HOPE YOU CAN JOIN US!

This session of the radio show shares the second of two public hearings held by the Franklin, MA Community Preservation Committee. We recorded this via the Zoom conference bridge Jan 18, 2022.

The recording runs about 1 hour and 18 minutes, so let’s listen to the public hearing of Franklin’s Community Preservation Committee held Jan 18, 2022.

The public hearing dates are:

The Online application can be found at this link https://franklinma.viewpointcloud.com/categories/1097

Additional information regarding the CPC & CPA can be found at the following links:

We are now producing this in collaboration with Franklin.TV and Franklin Public Radio (wfpr.fm) or 102.9 on the Franklin area radio dial.

"Workers hope to have improvements on the town common veterans memorial complete before Memorial Day.

The project aims to replace and re-grade the areas around the monument stones themselves.

Dale Kurtz, the town veterans agent, said the intent is to beautify the area."The memorial is a great place," he said. "Lots of people stop by, and it's well-kept by the garden club."


Continue reading the article online (subscription may be required)
http://www.milforddailynews.com/news/20160425/franklin-work-on-veterans-memorial-should-be-done-by-parade

Participants can shred tax returns, bank statements, receipts and other paper documents. Those attending are asked to bring one nonperishable food item for Franklin Food Pantry."


Continue reading the article online (subscription may be required)
http://www.milforddailynews.com/news/20160425/1776-financial-to-host-shredding-event

"The Franklin Downtown Partnership will hold a progressive dinner at staggered times beginning at 5 p.m. May 15.

“Our progressive dinner is one way we are reminding our community to visit Franklin’s downtown eateries during the road construction process. What better way than to have people walking through downtown, enjoying local restaurants and entertainment with friends?” said event organizer Jane Curran, owner of Jane’s Frames and FDP board member."


Continue reading the article online (subscription may be required)
http://www.milforddailynews.com/news/20160425/franklin-downtown-partnership-progressive-dinner-to-be-held-may-15

How breezy was it Sunday?

Breezy enough so that all the flags around the memorials on the Town common were pegged out straight!

150 years ago, the Battle of Gettysburg was fought July 1 - 3. Pickett's Charge is arguably the critical point of the 3 day fight that allowed the North to turn back the South.


My wife and I visited Gettysburg in 2008 and captured these photos on the visit.

For more about the battle
http://en.wikipedia.org/wiki/Battle_of_Gettysburg


The remains of 159 MA soldiers are marked in the cemetery where Abraham Lincoln gave the historic Gettysburg Address.

You can find the text of the Gettysburg Address on the Civil War memorial along the main street side of the Town Common.


Four score and seven years ago our fathers brought forth on this continent a new nation, conceived in liberty, and dedicated to the proposition that all men are created equal.

Now we are engaged in a great civil war, testing whether that nation, or any nation so conceived and so dedicated, can long endure. We are met on a great battlefield of that war. We have come to dedicate a portion of that field, as a final resting place for those who here gave their lives that that nation might live. It is altogether fitting and proper that we should do this.

But, in a larger sense, we can not dedicate, we can not consecrate, we can not hallow this ground. The brave men, living and dead, who struggled here, have consecrated it, far above our poor power to add or detract. The world will little note, nor long remember what we say here, but it can never forget what they did here. It is for us the living, rather, to be dedicated here to the unfinished work which they who fought here have thus far so nobly advanced. It is rather for us to be here dedicated to the great task remaining before us—that from these honored dead we take increased devotion to that cause for which they gave the last full measure of devotion—that we here highly resolve that these dead shall not have died in vain—that this nation, under God, shall have a new birth of freedom—and that government of the people, by the people, for the people, shall not perish from the earth.

Have a safe an enjoyable 4th of July!


to mark the 150th anniversary of this battleground, the National Park Service (NPS) is giving Gettysburg National Military Park the royal treatment this summer.  From programming for all ages, to remembrance ceremonies of all sorts, there will be an event to meet every need.  Just check out theNational Park Service website for details.

As we celebrate Veterans Day, if you haven't been to the Town Common recently to walk among the monuments these photos can help make that walk a virtual one.

My father was a veteran of World War II having served with the US Marine 4th Division on Saipan, Tinian and Iwo Jima. He was fond of saying that the real heroes did not come home.

On this Veterans Day, let's remember those who are among us and those who have mustered on!

It didn't take long to remove the sign for which that complaint was lodged at the Town Council meeting on Wednesday. Walking about for Franklin Photo Saturday, I checked on the Town Common and the sign previously found there was no longer around.

It was a glorious day for being out and about. I hope you all enjoyed your day.

During the Citizens Comment portion of the Town Council meeting Weds evening, Ken Norman objected to the sign on the Town Common near the revamped war memorials.

Going back to May 2009, these signs were present (one in front, one further behind) 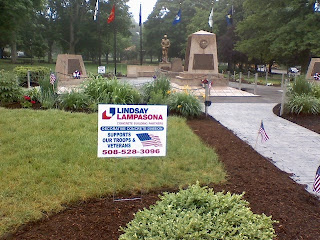 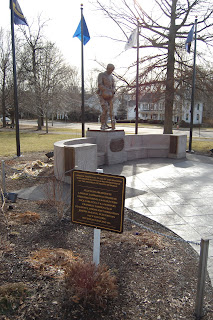 This seems to be a more permanent sign than the one depicted in 2009. The coloring is aligned with the monument color scheme.

What do you think? Should the sign be there?

There are a number of monuments around the Town Common in Franklin honoring the sacrifice of those who served in each war. On Memorial Day, we give thanks for their service.

The collection of posts about the monuments on the Town Common including the dedication of the new Iraq/Afghanistan monument on Memorial Day 2009.

The blue cover of the new memorial will come off during the ceremony immediately following the parade later this morning.

The unveiling should begin approximately 11:15 AM.

The WW I "doughboy" has been cleaned up. The bronze looks brand new.

Actually since this photo was taken, the small trees directly behind the monument have already been removed as the preparation for the new monument to be unveiled on Memorial Day continue.