(2) Per the MA DPH numbers reported via the Boston Globe for March 17, 2022  https://www.bostonglobe.com/2020/04/15/nation/massachusetts-confirmed-coronavirus-cases-by-city/ 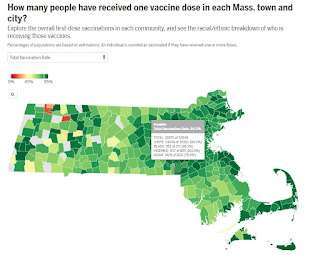 Via the MA Municipal Association (MMA) comes this article and intro to a good resource:


"At its Annual Meeting on Jan. 24, the MMA unveiled its MassTown Careers campaign, an initiative aimed at attracting a new generation of workers to careers in the state’s 351 cities and towns.

Facing a wave of retirements and a highly competitive job market, cities and towns confront a growing challenge in filling a diverse range of jobs, including in the areas of management, finance, information technology, public works and more.

MassTown Careers was conceived to raise awareness about the appeal of municipal jobs as a career choice for candidates of all ages. The heart of the campaign is video testimonials featuring Massachusetts municipal employees highlighting the wide range of available jobs and the many rewards of working for cities and towns.

“I’m passionate about doing work that is truly important to my community, my family, and myself,” says Carolyn Kosnoff, assistant town manager for finance in Lexington, one of the municipal employees interviewed for the project.

To apply for a vacant position, please submit a resume and cover letter to apply@franklinma.gov.  Please put the job title in the subject line of your email.

If you do not have a resume, you may send a completed Application for Employment instead.
http://www.franklinma.gov/human-resources/files/application-employment-town-franklin

"On this Saturday, January 27, all Franklin residents are invited to be at the new community room of the recently expanded Franklin Public Library at 10 AM to attend an intriguing presentation and discussion session concerning how to work constructively with town officials to help make Franklin’s municipal government function more effectively and transparently.

The Milford Daily News in a recent article about the upcoming event, quoted meeting co-originator Alan Earls as stressing the supportive, non-confrontational content planned for this session:

“We don’t want it to be an ‘us versus them’ thing at all,” he said. “I realize (town officials) also have a really big challenge in working with the town, because many of us don’t know a lot of what happens, and how it works.”

"Residents- Please remember Trash and Recycling will be delayed a day due to the Labor Day Holiday on Mon Sept 5th."

In response to some conversations about what can be done with the recent potential conflict of interest situation. There is a citizen option for a recall.

Given the requirements, it is a steep one. The petition needs to be signed by 5% of the registered voters. That is doable. The steepness comes from the voting. As you should be aware, Franklin only gets more than 20% of the voters out for an election involving money (e.g. an override). For this recall initiative to be successful, more than 25% of the voters are required to vote in this special election.

The last special election (Dec 2014) (to replace Glenn Jones on the Town Council when he resigned) drew just over 200 voters. About 1%.


Any elective officer of the Town may be recalled and removed from office by the voters as herein provided. Any voter may file with the Town Clerk a petition containing the name and title of the elective officer whose removal is sought. For all elective officers such petition shall be signed by the qualified voters of the Town equal in number to at least five percent (5%) of those registered at the last regular Town election. Such recall petition must be filed within fourteen (14) days following its initial date of issuance.


If within seven (7) days following receipt of the petition the Town Clerk shall determine it to contain a sufficient number of valid signatures, provisions shall be made for a recall election to be held within sixty (60) days but not sooner than forty-five (45) days thereafter, provided that no such election shall take place if the regular Town election or another special election shall be held within ninety (90) days. All procedures for voting upon the recall question and filling any vacancy caused by the recall of an officer shall be in the same manner as provided by general law for the conduct of Town elections.


Any officer sought to be removed may be a candidate to succeed to the same office, and unless the officer requests otherwise in writing, the town clerk shall place the name of the officer on the ballot without nomination. The nomination of other candidates, the publication of the warrant for the removal election, and the conduct of the same, shall all be in accordance with the provisions of law relating to elections. Ballots used in a recall election shall ask if the officer sought to be recalled shall be recalled; and shall provide for the names of candidates seeking the office of the officer recalled.


If the votes cast upon the question of recall is in the affirmative, the candidate receiving the highest number of votes shall be declared elected provided that at least twenty-five percent (25%) of all those qualified to vote shall have voted.


Note: this is not Franklin Matters or Steve Sherlock taking a position on this topic, this is simply sharing the information to continue the informed conversation already underway. As has been stated before and may need to be restated periodically, I do not take positions. I share information that is factual and timely.

Papers will be available in my office beginning on Monday, August 3, 2015. Important dates for candidates to know and remember are attached to this email.

If anyone has any questions, please call me at 508-520-4900. Elections have always been a very exciting and busy time in the Clerk's office.

You can find this document online at the Franklin website
http://town.franklin.ma.us/Pages/FranklinMA_Clerk/Nov.%203,%202015%20Town%20Election%20News.pdf

Some towns reuse retired police cruisers and other vehicles as take-home cars, but others, such as Ashland and Franklin, said repair bills and the cost of converting cars for civilian use can be high.

"They're just not cost-efficient," Franklin Town Administrator Jeff Nutting said.
Towns otherwise often buy vehicles through a state bidding process or at auction, including at Adesa in Framingham.

In Franklin, Nutting said he has phased out several take-home vehicles as employees with that benefit retired or otherwise left the town payroll.

"Some of those jobs we never filled, or as (new) people come in, they have to bring their own vehicle back and forth for work," Nutting said.

The town plans to cut two more next fiscal year, when the town engineer and deputy public works director are expected to retire.

But there are few cases left where take-home vehicles could be eliminated, Nutting said, echoing many managers who saw most arrangements as necessary.

"I'm running out of folks to scale back on at this point," he said.

More about Sunshine Week - a national initiative to highlight open government, freedom of information, and transparency can be found here.

Franklin's vehicle listing as of June 2010 can be found here. (I'll get an update this week.)


This was originally posted on the Franklin, MA website here
http://franklinma.virtualtownhall.net/Pages/FranklinMA_News/015B9553-000F8513

"It's no mystery why so many would choose to live here"

I know this place in Massachusetts
That's better than best it's as great as it gets
It's beauty and all of it's history's awaiting for you!


Folks are as friendly as friendly can be
Open your eyes there's plenty to see
Let's take a look at the long list of things you can do...


Well, then there's the common that's uncommonly good
Where townspeople gather as townspeople should
Weddings, concerts, and festivals throughout the year


And monuments honor the mighty Mann, Horace
And all that this father of education did for us
It's no mystery why so many would choose to live here

From Al Pacino's character in Any Given Sunday:

Either we heal as a town or we’re going to crumble;
inch by inch, play by play, until we’re finished. *


Thanks to Bruce at Customer Experience Matters for the link.