No more iPad musical toys. This time, it is real instruments and live action, creative, fun with paints all captured and rendered with stop motion video.


The 4th Annual Random Smile Gala will be held at Christina's in Foxboro at 6:00 pm. The event is a semi formal, black tie optional affair. There will be a surf and turf dinner with live music and both live and silent auctions. A few of the items up for bid include Patriot and Red Sox memorabilia, vacations, golf related items and electronics. Tickets are $100 and may be purchased via the Random Smile web site.

There will be a Franklin Community Garden meeting to be held on Monday, February 28th from 7:30-8:30 PM. The meeting will be held at the Franklin Stop and Shop in the community room.

The meeting is open to the community, so feel free to bring others who are interested in getting involved. If you plan on attending this meeting, please send an email to franklincommunitygardens@gmail.com

When you arrive at Stop & Shop on Monday, ask the customer service desk to direct you to the Community Room.


Thanks and we hope to see you on Monday the 28th!

In health and seedlings,
The Franklin Community Garden Steering Committee

Representatives from Franklin's Teenangels testified before Attny General Martha Coakley at a hearing on the progress of the anti-bullying legislation:


One item that was not written in the article was that Parry Aftab presented the kids with the "Teenangel Chapter of the Year" award at the hearing in front of Attorney General Coakley. The kids are soo excited. This was the first time in 6 years that this award has been given to a chapter other than the New Rochelle, NY chapter.

"They are really not beholden to anyone"

"Any way you slice the data, we look like a low-tax, efficient (town government), dangerously over-reliant on a revenue source (state aid) on which we have no control," Whalen said.

"They're a new set of eyes and they will challenge things (in the previous report) as they go through the process," said Douglas Hardesty, the committee's chairman. "When we are through, hopefully we'll learn something new."

At a meeting last night, the committee discussed an analysis done by Whalen showing how Franklin compares to 30 comparable communities in the state in tax rate, and spending on education.

Read my notes from the same meeting here


Franklin to hold party for residents who share birthday with town

Two soldiers relieved to be back in the States

Approval of minutes - postponed to next meeting
Action items - none

background, research analyst for an investment banking firm
drawn in by a comment made by J Nutting at a meeting sometime ago; "a town's budget is a reflection of their values"
started collecting data, started with a map and filled in data for the communities around us
The DOR site is a tremendous source of info, so much data is available
came up with 30 communities
walking through the info on his comparison worksheet
color coded communities by single versus split tax rate
we have a low tax rate compared to other communities with either a split or single tax rate
we are 21st in comparison on the average tax bill (of the 30)
we are 26th on relative tax burden which is a comparison of tax rate to community wealth
we rank 28th in percent of local property tax contributing to the total community revenue
we rank 1st in the percent of state aid contributing to the total community revenue

second sheet on Dept of Elementary and Secondary Education data
rank 27th of the 30 on per pupil spending for 2009 and would be on 2010 as well, two towns are missing data for 2010
we rank 10th in the same 30 for percent of population in school, so amongst larger communities, we have more students than most

discussion on the quality of the whole educational experience and how to best represent what we get. MCAS scores are readily available, SATs offer more comparison to those outside MA, with the increase in fees, cutting of enrichment programs, protected the core curriculum (and maintained, if not increased performance).

need to show where the cuts are happening, i.e. how much of the budget is allocated to the core versus the enrichment and what does that show? are the changes in the program indicative of the budget issues? how much of a lag in the reporting is there? We are seeing the early warnings amongst the low income and English Language Learners (ELL)

The recent requirement to meet the bullying legislation within the budget restrictions, resulted more in a shifting of resources; language was removed from the elementary grades, Latin was lost in middle schools, the Spanish teachers moved from the elementary to middle and we are adding health teachers to meet the curriculum requirements for bullying

talked bout looking at the numbers, need the story to tell, how to convey the erosion that is occurring with the cut of over 100 teachers with an increase in students

Is there a community that was high and made cuts, where are they now? Randolph is one example amongst the 30 communities

can we tackle some of these things; i.e. key metrics around the school numbers are validated, define a number of meaningful metrics and a story around it (for four weeks out)

comparison of Fire similar, comparison of DPW more difficult to compare
we rank 14th on per capita overall town budget

in a comparison to Natick the population is similar, yet the growth of Natick since 1990 is 6% versus Franklin in same period of 45%. they have had a growth of 45% in net state aid versus 350% for Franklin in the same period

there are many takeways from this discussion, need to continue to look in the numbers, challenge them, there is a benefit to the simplicity in our peer group, do need to challenge the comparable listing

visibility creates trust so when you include the same listing, it makes it easier, when you start excluding some here and some there, it creates questions

it is not cherry picking the data, it is creating an apples to apples comparison

no matter which way we slice the data, we have a low tax, we are efficient, and we are dependent upon state aid which we have no control over

show the 30 peer communities and include the state average

need to include some value metrics, what are we getting that we are paying for?

How about a student iPad orchestra?

In the News - student auction

"He took great pride in the entire athletic program"

... the school district will ensure Leone isn't forgotten by naming the away-side press box at Franklin High School in his honor. The press box above the home bleachers is named after public address announcer John Padula.

"The stories we've heard from over the years recounted what a great coach he was and how many lives he changed," School Committee Chairman Jeffrey Roy said. "We like to honor those types of people and thought it was tremendously appropriate to honor his name and somehow relate it with our football program."

The School Committee approved the recognition at a recent meeting and Roy said school officials hope to hold a ceremony at a home football game in the fall.

Read the full article in the Milford Daily News:

Other action items from the Feb 15th School Committee meeting can be found here:
http://franklinmatters.blogspot.com/2011/02/live-reporting-action-items.html

The full set of notes reported live from the meeting can be found here
http://franklinmatters.blogspot.com/2011/02/school-committee-021511.html
Franklin, MA

If life for the Class of 1961 has been topsy-turvy since graduation, I would not be surprised. 1961 was a special year. As wikipedia points out MAD Magazine's March 1961 issue announced that


this was the first "upside-up" year—i.e., one in which the numerals that form the year look the same as when the numerals are rotated upside down—since 1881, and the last until 6009

If you know of anyone in the Class of 1961, please let them know they are welcome to join the Franklin High School Graduation of 2011 as honored guests.

There will be a reception at 3:00 PM at the high school. The Class of 1961 will then process into the graduation with the Class of 2011.

Email ThisBlogThis!Share to TwitterShare to FacebookShare to Pinterest
Labels: class of 1961, FHS, graduation

Running early one morning, I was startled to see a large X marking the sky over the Parmenter School. Such an opportunity was not to be passed up. I did stop and find the best view point for a quick photo. Then resumed running.

Email ThisBlogThis!Share to TwitterShare to FacebookShare to Pinterest
Labels: parmenter

Dona's Tailoring has moved to Dean St. You might still see the sign on Cottage St where they used to be. Why the landlord won't allow a sign redirecting folks to the new location is another topic for another day. 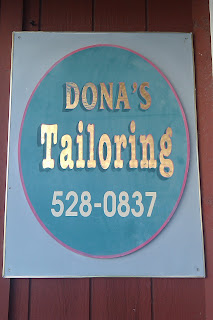 They are now located at 19 Dean Ave. Just behind Dean Bank. A block down from the Post Office.


Updated: I realized late on Sunday that I left out the prime reason for creating this post. I had taken my dry cleaning to DryClean Pros and asked if they could repair a zipper for an athletic jacket I had. They couldn't but referred me to Dona's Tailoring. I remembered having seen it along Cottage St and found where it used to be easily enough. It was no longer there. Searching on the web gave me lots of links to their old address and finally one link had a comment that said they had moved.  The next Saturday, I managed to get there while it was open and leave the jacket for repair. Dona told me the story about the landlord refusing to allow the re-direction sign. A couple of weeks later (only due to my schedule) I returned to pick it up. I should also note that I did return to DryClean Pros to let them know of the address change. They appreciated the update.

Small businesses need to be aware of how they are found on the web. There are so many directory services it may seem to be a full time job to track them down and make the changes.

What is the alternative? Incorrect information will send your potential customers to the competition! Take one directory at a time, fix it, then get on to the next. Eventually, all the info will be correct and your customers will find you.

On the train of thought around the words we use and how we use them, this talk by Krista Trippett makes some compelling points about compassion.

Krista talks at point about this remarkable observation from Matthew Sanford:


"He says that he has yet to experience someone who became more aware of their body in all its frailty and all its grace without at the same time becoming more compassionate towards all of life."

Later in the talk she shares some insights from Albert Einstein including:


"... He foresaw that as we grow more modern and technologically advanced, we need the virtues our traditions carried forward in time more, not less."


Franklin's charter was updated recently to bring some of the language to a more appropriate usage for today. I do believe we need to remember the values and virtues that Einstein remind us to use more not less.

We are members of a commonwealth. We need to help each other, together we can do more than survive. Divided we won't stand a chance.